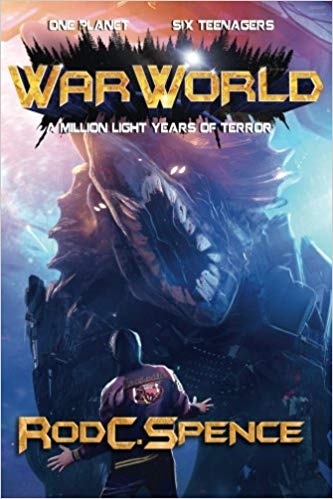 Six teenagers sent 2.4 million light years from earth. An expedition of the world’s brightest biotech scientists missing on another planet. An alien army controlled by a powerful wizard called The Shadow Lord. Prehistoric creatures sent on assassin missions. “War World,” by Rod Spence is a fast-paced action thriller that will keep you on the edge of your seat.

Jeremy, Patrick, Alex, Marrisa, Selene and Leo’s parents all work for a company called TerraGen Universal, the world’s leading Biotech company, sought after by mafia companies for their technology. The teenagers learn that something went terribly wrong with their parent’s expedition.

After receiving a secret message from his brother, Jeremy and his classmates embark on a mission to save their parents and possibly the world. The team consisting of the CIA, scientists, mercenaries and 6 teenagers travel across the galaxy through a wormhole that was created by TerraGen’s quantum computers. When the team gets to the other side of the wormhole they arrive on planet Genesis, a planet light years away from earth and home to blood thirsty Gnomes, prehistoric creatures, and wizards both good and bad. When the teenagers get split up during an attack, they must find their way out of the city to stay alive. The kids must make it through hidden passageways and secret entrances to escape the Gnomes who are hunting them. Once free of the city both groups encounter enormous creatures, wizards and deadly terrain. They begin to doubt they will ever find their parents and their other classmates, let alone survive this hostile planet and get home in 30 days before the return portal closes.

I thought “War World” by Rod Spence was an action-packed adventure with twists and turns of unexpected horror. While some parts were on the gruesome side, the story line was intense. I enjoyed the thrill of the chase as the groups narrowly escaped the Gnomes who wanted nothing more than to eat them. I think my favorite character would have to be Patrick, he is extremely smart and has an attitude and doesn’t let people like Alex push him around. The creatures were realistic and terrifying as they hunted the groups through inner city passages and a forest consisting of deadly terrain. Once I started reading, I could not put this book down, and finished it in two days! I look forward to reading the next book in the series, “War World, Paladin”.

I would recommend “War World” by Rod Spence to 9th graders and older who enjoy an action packed, space travel thriller.