Walter the Wanderer by Pavle Sabic 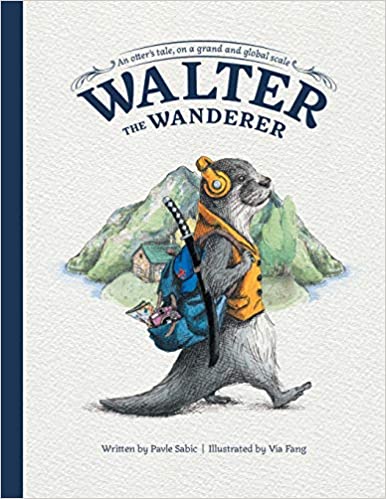 “Walter the Wanderer” by Pavle Sabic is the fun story about an otter named Walter who goes exploring around the world. Walter lived with his family, but then a storm ruined their house. The family went exploring for a new place to live, and they stopped in Scotland. Walter had to get used to Scotland because they dress, talk, and play sports differently than he was used to. Walter got used to it and started liking it there.

When he got older, he decided to go exploring around the world, like his family had done before they stayed in Scotland. Walter went lots of different places, like Spain, Italy, China, France, and the United States. In each of those places he met a friend and did some fun things; also, in those places he met grouchy people who weren’t very nice. Walter decided that a hug would fix everything, so when he gave everyone hugs, they started liking him.

Walter wanted to go back to Scotland, but when he got back, he discovered that his home had been destroyed by a storm while he was gone. Walter was sad, but then he was surprised to see his new friends come and help him to rebuild his house. Walter was happy and all of his friends were, too. I like that this story has a happy ending, and that everyone ends up friends. I know I feel better when I get a hug, so I’m glad that all of the grouchy animals got better, too. I liked reading about the different places around the world and learning a new word from each of those places. This is a story that anyone would enjoy.

Note from Mom: As Lydia said, this is a story for all ages. The message is great: be friendly, it’s contagious. This story is another example of an entertaining and educational book for kids and adults. You are never too old to be reminded that it’s always best when you’re nice to others, even when they don’t start out being the nicest to begin with. The idea of exploring and seeing what all the world has to offer is a great message too for people of all ages – there is so much to see and experience! Also, the idea of adjusting to a new area can be pertinent to kids who have to or end up moving multiple times or even just occasionally. The pictures are wonderfully done, and the story overall is a lot of fun to read.