“The Iron Citadel” by Mitch Reinhardt 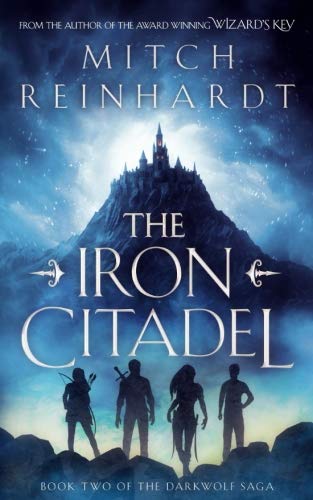 The second book in his Darkwolf Saga, “The Iron Citadel” by Mitch Reinhardt is a great epic fantasy adventure.  It’s full of action, with loads of strange characters and an exciting storyline that makes you want to keep reading.

Geoff, Jane and Sawyer are just three ordinary teenagers. Or are they? When the world of Alluria is threatened once again by the evil Shadowlord, their old friend Ariel, an Elven Druid, comes to them for their help. Will they join their old friends in the battle to save the world or look the other way?

The author created an exciting world in Alluria that was easy to picture with his descriptive writing and magical characters, and I really enjoyed my reading experience with this book. Since I did not read the first book in this series (yet), I was a little concerned about picking up the story in the middle, but that was not a problem at all as I was immediately hooked with the dramatic opening scene and quickly caught up to speed with what was going on so far.

The teenagers are genuine and realistic, though immature for their ages.  Even though they all went to school together, Geoff’s character appeared to be much younger than Jane and Sawyer, and I couldn’t quite picture him as a teenager. I found Sawyer to be really a bit of a whiner and Jane more like a babysitter at times, but it was fun to see the characters grow as the story progressed. The fantasy characters are the most captivating creatures in the story in my opinion. I especially connected with Ariel and looked up to her personality and temperament as a strong, confidant female. There are a lot of characters to keep up with and you will definitely have your favorites as well as the ones you like to hate.

I recommend “The Iron Citadel” by Mitch Reinhardt to fantasy lovers of all ages.  Even though the story revolves around teenagers, the complex storyline, unexpected twists and surprises and the battles between good and evil will be enjoyed by adults as well as teens. It’s a long read at almost 500 pages but with such a fast-pace you’ll find yourself at the end in no time. With an ending that leaves you wanting more, the next installment in the saga should be very exciting!