“The Irate Pirate” by Jim Best 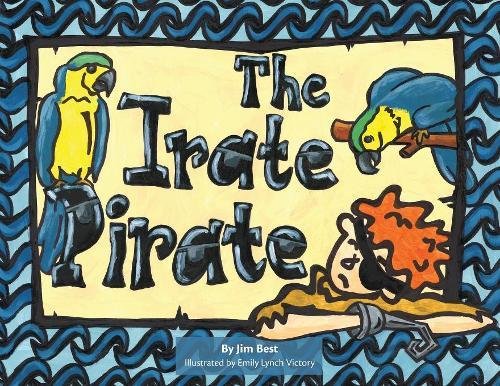 “The Irate Pirate” by Jim Best is a story about a young boy named Petie, who is a pirate in training. It’s only natural for him to be one since his parents are pirates, all his friends are pirates, and so is everyone at school! Or so he thought. As he continues learning what being a pirate is all about he starts to believe that maybe the pirate’s life is not for him. But how could he tell those around him this when they’re all pirates themselves and expect him to be one also?

“The Irate Pirate” teaches a good lesson about not forcing one’s self to follow others’ expectations and to decide your own path because at the end of the day your happiness is what matters most. In the story, Petie knew that being a pirate wasn’t for him but found it hard to tell anyone for fear that they would be disappointed in him. What made it even more difficult was that some kids would bully him for feeling this way too. In the end, though, Petie knew he couldn’t keep pretending and despite knowing that some people wouldn’t agree with him he was able to gather enough courage to open up about his dilemma to the most important people in his life, his parents. This was a big moment in the story because as we know a parent is the biggest influence in a child’s life and what we say and do has a big impact on them. Petie’s ability in opening up to his parents showed he trusted them with his problems, something all of our children should be able to do, and because he opened up they were able to help him find what truly made him happy.  So, while this story teaches children the importance of being true to themselves, it also teaches parents that acceptance of their children’s choices plays a big part in their happiness.

As we read “The Irate Pirate” we found ourselves discussing the importance of being true to ourselves and being open and honest with one another. This type of discussion was important to have with them as they begin their life journey into who they are and want to be as a person and I’m happy this book opened up the opportunity to have this talk with them. For the enjoyment of the book itself, I thought the pirate theme was a good way to discuss a topic this important for a child and we had fun reading it together.

The story was simple enough for a child to understand the lesson it was trying to teach without being too difficult to grasp which is something I really liked. The humor in the storyline made us laugh and the art was colorful and charming to look at. I wish some of it been detailed a little better, such as characters with only 2 fingers in place of 5, but it’s not something children would care about and doesn’t affect the enjoyment of the story. Our favorite character was Petie because we thought he was very brave for what he did, and we loved his treasure map at the end and how all the steps to reaching the “treasure” at the end were steps to living a life true to yourself.

We truly enjoyed “The Irate Pirate” by Jim Best and the lesson it taught. I would encourage all parents to read it with their children.