“The Imperfect Garden” by Melissa Assaly 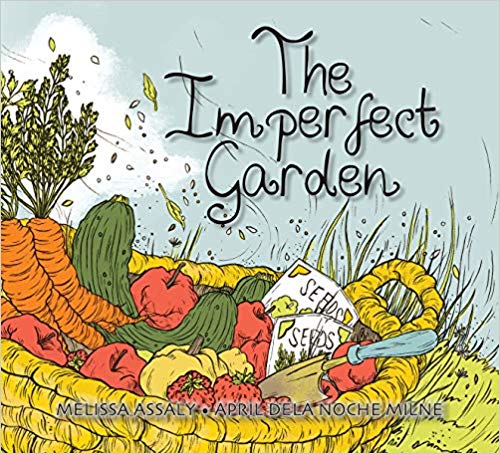 “The Imperfect Garden” by Melissa Assaly is about a little boy who helps his mom grow a garden. They always start in the spring. The mom plants the seeds and the boy gets to help water. They grow lots of yummy food. In June they get to start picking their cucumbers; these cucumbers aren’t straight like at the store, they are all different shapes. The boy asks the mom why these are different than at the store, and his mom says that normal cucumbers can be shaped this way, but people don’t like to buy those, so they get thrown away. In July, they get to pick their carrots. The boy finds a carrot that looks like it has two legs! The boy eats both his two-legged carrot and a straight carrot, and he says they both taste the same-yummy! In August, they get to pick apples off of their tree and make apple pies. Some of the apples that they pick are bumpy and not just red – not like the ones at the store. The boy got to eat both kinds of apples in the pies, and he said they both made the pies very yummy. By October, they have eaten all of the food from their garden, so they have to go back to the grocery store. The boy thinks that the fruits and vegetables that he can see at the store are boring. Then he is taken to where the ones he thinks are cool are, and immediately likes them better. There is even a three-legged carrot at the store!

I liked this story because we also grow a garden in our backyard. I like to help with watering and picking the vegetables when they are ready in the summer. We haven’t seen any funny looking vegetables from our garden, but it would be cool if we do sometime. I also liked the pictures because it shows what is going on and makes the story easy to understand.

A Note from Mom: Like Lydia, I also really enjoy this book. Lydia and I can relate to these characters through their love of growing home-grown food. As stated in the back of the book, sooo much food is being wasted here in the United States – 168 million tons to be exact, and it’s sad to think that it is because people feel like because the food doesn’t look “normal” then it’s going to be bad. It’s fun to be adventurous with your food! I feel like the author did a great job of getting that message across, and it’s good to start this early with kids.