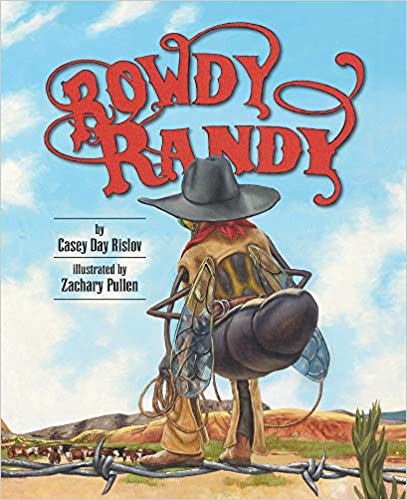 “Rowdy Randy” by Casey Day Rislov is the story about a horsefly named “Rowdy Randy” who likes to annoy other animals in the wild west. The story starts with Randy flying around, looking for an animal to bother. She finds a dog, but the dog almost bites her! Then she flies away and gets splashed by a fish! Randy doesn’t let that bother her though. Next, she tries to find some animals to work with her to bother others. She finds some birds, but none of them want to join her team. Randy decides she wants to be on her own, anyways. She finds a lizard to ride like a bull, and then faces off with a buffalo in a staring contest. She flies over some prairie rattlesnakes and then starts a stampede with some cattle! Some cowboys stop the stampede, and Randy feels good thinking there are other cowboys around her. Randy is singing in the night, then the story just ends when a cowboy starts grabbing at her.

I like that Randy is a cowgirl and she gets to see some neat animals in the desert. I wish the animals were named in the book so I could know what they all are, but I was able to look up some of them to find out. I like the pictures in the book- they are very pretty and fun to look at. Randy looks pretty when you see her sparkly green eye shadow! It would be fun to read more stories with “Rowdy Randy” and her adventures.

Note from Mom: “Rowdy Randy” is a cute cowboy/wild west story with a horsefly as the main character. I was only able to know this by reading the back sleeve of the book, as it doesn’t identify what kind of flying insect she is, and as Lydia said, the type of animals that Randy comes in contact with aren’t identified either. This doesn’t really deter from the overall story, it’s just something we noticed. The story was cute, but the ending was a little confusing. I wasn’t sure whether we were supposed to take the very back of the book as the real ending or make up our own? Overall, with the pleasing illustrations and the fun storyline of a horsefly as a cowgirl, it is recommended for kids of all ages, especially those who enjoy playing cowboy/girl.