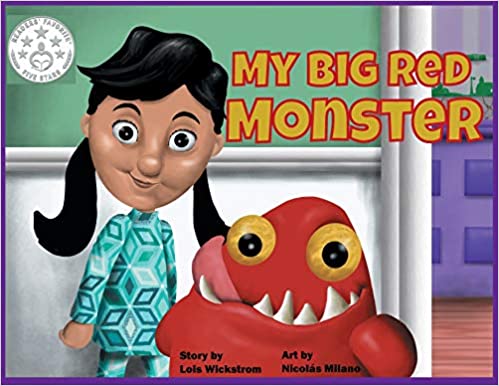 “My Big Red Monster” by Lois Wickstrom is the story of a little girl who has a big red monster living under her bed. The girl tries to tell her brother about the monster, but he doesn’t believe her and says that there are no such things as monsters. One night, the girl asks her monster what he wants. He answers that he wants something to do, and if she can’t give him something to do, he’ll eat her up! The girl is now scared of getting eaten, so she tells the monster to clean her room. The monster gets done with that really fast and wants something else to do. The girl must keep thinking of things for the monster to do or else she’s going to get eaten! Then one night, her brother asks about her monster again, and tells her that it’s not real. The girl has run out of things to tell her monster to do, except for one more thing.

I think I would feel the same way as the little girl in “My Big Red Monster” and be kind of scared of my own monster, but then when I realized that it only wanted something to do, I don’t think I’d have a hard time giving it something to do around my house. I liked that the monster made everything clean again! This book is not scary, even though some kids might think so since it has a monster in it. I think that any kid will like this book.

Note from Mom: When I was reading this book, I thought of the books in the “I Need My Monster” series by Amanda Noll; mainly because there is a monster under the bed in both books, and the characters have some sort of attachment to them. Lydia likes to make things clean and organized, so she enjoyed this story because of that aspect. This book can seem realistic to little kids around the little girl’s age and it can be used as a learning opportunity for the parents to see how the kid will respond in that hypothetical situation. Overall, it’s a great book for kids with a hidden message about problem-solving based on the Hindu Teaching Tale by the same name.