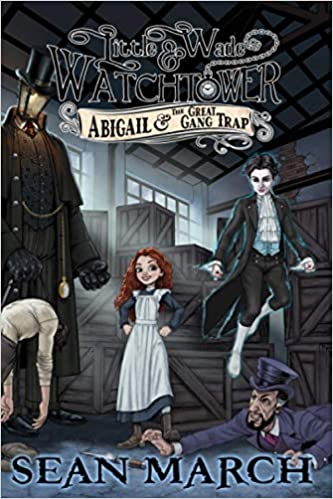 “Little Wade and Watchtower: The Great Gang Trap” is the first book in a new fantasy series for teens by Sean March. The story is about thirteen-year-old Abigail, who just moved to New York City with her father. Things are very different in the city and not very friendly. The action starts when Abigail is chased by gang members on her way home one night. One by one the people living in the neighborhood close their windows and doors, ignoring Abigail’s cries for help. But wait, did that lamppost just move? And is that little boy blue? Yes, it’s Little Wade and Watchtower and together with Abigail and some other peculiar friends they work to get rid of the gang members for good through the Great Gang Trap!

Even though it’s a very long book and will take a while to read, the author makes it easy and fun so it doesn’t seem like it’s too long. The writing is like singing with the way things are described. One example is, “Abigail finally detected the source of the mechanical whirring, clicking, clanking, hissing, knocking, popping, grinding: the giant’s limbs and joint.” You can see, there’s never just one word to describe a situation and that makes you want to keep reading, to see what’s going to happen next, AND also to see how it’s going to be described. This book was fun to read.

The characters are great. Abigail is adventurous. Even though she may be afraid at times, she’s brave and always willing to try something new, especially when it will help someone else. Little Wade is like a teacher and also a friend who is very likeable because he’s so straightforward. Watchtower is mysterious and never says much but communicates by typing out notes. The gang members and some of the ghosts aren’t just bad, they are REALLY bad. You definitely will root for Abigail and her friends to take them down. Their names are creative as well like, Mr. Makepeace, The Wild Cards, the Longshadows, Night Owl Nell and others.

I also liked the way the story never stopped growing into a deeper mystery. Things aren’t what they seem like and there is a lot going on. When you think you know something is going to happen, a lot of times something else happens instead. One part near the end had me yelling, “NO!” when Mr. Makepeace does something unthinkable. You’ll just have to read the story to find out. The whole story feels like a ghost story since it’s set in New York City in 1899 and the ending guarantees there is another adventure coming.

I recommend “Little Wade and Watchtower: The Great Gang Trap” to both boys and girls ages 10-15. Even though the main character is a girl, boys will like all the non-stop action. There’s a lot everyone can enjoy, science, adventure, mystery, ghosts, friends, and more.