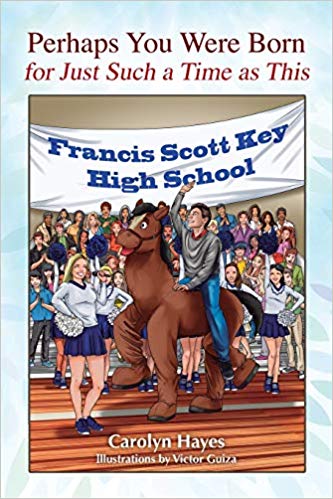 “Perhaps You Were Born for Just Such a Time as This” by Carolyn Hayes is about a group of kids from Frances Scott Key High School and how they solve the bullying problem.

One of them, Benjamin, was being bullied by Vince. It started out with little things, but it got really bad towards the end with Vince getting rougher and more aggressive and also sending Benjamin evil texts when he couldn’t get near him at school. The cheerleaders saw what Vince was doing to Benjamin and decided to help. They set up a couple different schemes to bring the bullying to a stop. I thought it was really cool the way the cheerleaders helped Benjamin instead of being stuck up and mean. I think the author did a good job of making the kids smart and helpful. I also liked the way the adults in the book let the cheerleaders handle the problem but in real life I think sometimes the adults have to handle things that are getting out of control.

My favorite part of the book was when the author interviewed Benjamin about his experience being bullied.  In the story Benjamin was pretty quiet the whole time but the interview made him more realistic and I could relate to him better because he seemed like a real kid. And, he could be real because the things that happened to him happens to kids all the time. Benjamin had some great answers and I laughed when he said you shouldn’t ever put anything into a girl’s purse or backpack because they were like black holes! God wasn’t mentioned at all during the story, but Benjamin talked with the author about him during the interview and I thought that was a good way for the author to bring God into the story.

I recommend “Perhaps You Were Born for Just Such a Time as This” by Carolyn Hayes for kids ages 12 and older, but younger kids would enjoy it as well because it has important information about standing up to bullies and not keeping it secret.  It’s a good message for all kids in school.