“Our Super Solar System” by Camden Short and Michael Short 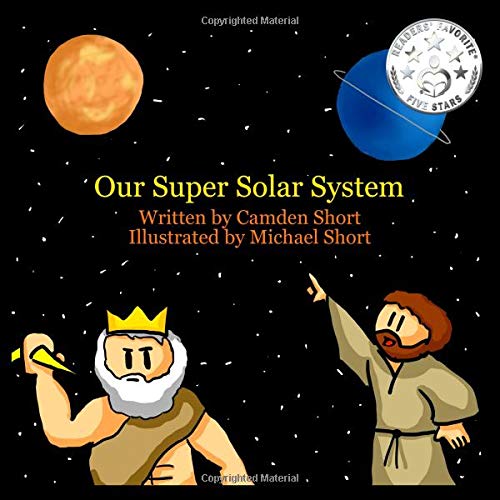 “Our Super Solar System,” written by Camden Short and illustrated by Michael Short, is about our solar system and everything that is included in it. You start out learning about the sun, and how it is a big star that makes everything really hot. Then I learned about the moon and how it circles around the Earth and is bright at night because of the sun. Next, I started learning about the planets in our solar system. Mercury is hot and cold during the day and night. Venus is really hot all the time (it was funny to see a picture of an ice cream cone in space—they don’t belong there)! Earth is where we live and the only planet with people on it. Mars has volcanoes and ice on it and is the color red. Jupiter is REALLY big, Saturn can float (it looks like a sailboat)! Uranus is sideways, Neptune is windy and the color blue, and Pluto is not a planet anymore since it is so small. Then I learned about the rocks in space, called asteroids, and how people a long time ago used to look at the stars a lot and they gave the planets their names and they named the many moons that go around the planets funny names.

The stars in the sky can be traced together to make pictures that are called constellations. All the stars and the planets around us are in the Milky Way. I think space is really neat, and I was told that if I like it, I should look into being an astronaut or a scientist. This book has fun pictures to look at and lots of information about space; I think for other five-year-old’s, they will need an adult to read it to them and explain some of the pages, but for a little-older-kids, they will like the book.

A Note from Mom:

The siblings Camden and Michael Short did a great job of putting together a book about a concept that even adults find to be difficult to understand, and tailor it to children to spark their interest in the vastness of space around us at an early age. The pictures were very child-friendly, including a planet per page with usually another image beside it to reinforce the text or show size comparison. The idea of mythology is tough for all age groups, and I’m not sure my daughter completely understood it, but with some help from mom, I think she got the gist of it. Overall a great read for my five-year-old, but at maybe 7-8+ years old they might get a little more out of it as far as understanding the material, but she still enjoyed the book.