“O is for Ohio: An Alphabetical Journey Through the Buckeye State” by Kelley Clark 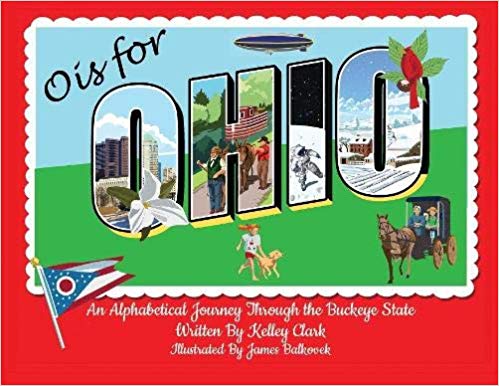 “O is for Ohio: An Alphabetical Journey Through the Buckeye State” by Kelley Clark is a story where each page starts with a letter of the alphabet. The book starts with the letter A and how it stands for people who are called Amish and how they ride in a buggy that is pulled by a horse. Then there is B that talks about a seed that is in Ohio called the Buckeye that looks like a nut and is supposed to be lucky. The letter C is about the cities in Ohio, D is about the people who are from Ohio that have already died who invented things like the lightbulb and the airplane. The letter E is about a lake that is by Ohio called Lake Erie. It was neat to read how there might be a sea monster there named Bessie, but sad how it used to be really yucky in that water until people started cleaning it up, and Dr. Seuss talked about Lake Erie in one of his books. Then F is for football, which I don’t watch, but my daddy likes a lot.

The rest of the book goes through the rest of the alphabet. My favorite letter is the letter P because it talks about donuts that start with the letter P in Ohio that look really yummy and make me want to go to Ohio! I also liked the page about Z that talked about the zoos in Ohio. I love seeing animals and would love to see more at their zoos. I didn’t know very much about the state of Ohio before I was read this book, but now I know a little more. I know that lots of people that have done big things are from Ohio and lots of Presidents, too. The pictures were colorful and included a lot of things on each page.

A Note from Mom:

“O is for Ohio” is a very factual book, while at the same time entertaining for both kids and adults. The format of the book reads like a “read-along” book, with the child reading the shorter sentences at the top and the adult reading the longer paragraph at the bottom of the pages. Like Lydia, I wasn’t too knowledgeable about people or events from Ohio, but after reading this to her, I feel like I know a lot more know. I didn’t know that the famous jam/jelly company, Smuckers, was founded by a guy from Orrville, Ohio, or that Annie Oakley was from Darke County, Ohio.

Based on this book, Ohio has a lot to be proud of, and plenty to fill up an alphabet book. I would say kids around five and older will get the most out of this book, with the younger kids having to have some of the information about the letters explained more.