“Nellie the Narwhal” by Sarah Cullen and Carmen Ellis 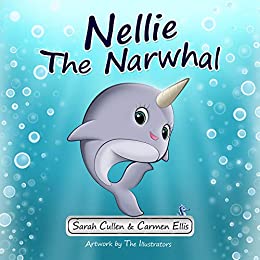 “Nellie The Narwhal” is an engaging picture book for ages 3-7. There are several layers to this book which makes it useful to teach different lessons. On one level, it is a fun rhyming story about the experience of an adorable narwhal and her sea creature neighbors. But it is also a great book for emotional learning. And finally, it offers a brief introduction to different inhabitants of the ocean world.

The authors, two sisters, know their subject and their audience well. The sisters own a business called Majestic Whale Encounters. They take people swimming with whales at picturesque places around the globe.  The book “Nellie The Narwhal” was written to gift to children who went on the tour with their parents. However, the authors felt that the book was something special that should be shared with a broader audience. The authors endeavor to spread “…ocean education to help nurture children’s love of the underwater world.”

The story has a familiar theme. Nellie is bored and is looking for someone to play with. She comes across various sea creatures during her search for a playmate. First, she meets Harper the whale who is happily splashing by slapping her tail. When Nellie asks to join in, Harper tells her “This game is not for a girl of your size.” Next, she encounters her friend Bill the octopus who is juggling with his eight arms. Nellie wants to join him, but Bill tells her “…you have no arms and you see I have eight.” Nellie then meets Tommy the turtle who is playing hide-and-seek with his shell. Again, when Nellie wants to play, she is told by Tommy that she cannot join him because “…to play hide-and-seek, you will need a nice shell.” Nellie sadly returns home without being able to play with any of her friends.

However, instead of feeling lonely and sorry for herself, Nellie is determined to find a way to play with her friends. With a little contemplation, Nellie finds solutions that allow her to play with her friends. Nellie realizes she is not too small to slap her tail and splash with Harper the whale. Instead of using his arms to juggle, Bill can use them to tickle Nellie. Nellie creates a new game to play with Tommy the turtle. She ties seaweed into a hoop and lets Tommy try to get the hoop over her tusk. Nellie uses her intellect and imagination to overcome her dilemmas and the book nicely resolves in the end.

The rhyming and illustrations are engaging for children. The storyline is relatable to the intended audience. Nellie relies on her abilities to resolve her problems exhibiting confidence, intellect, and imagination. Knowing that they can resolve some of their problems on their own is good modeling for young children. The book also introduces several sea creatures and highlights some of their unique features. It makes a great introduction to units on the ocean. The book also includes a short quiz with answers at the end. The questions introduce some more facts about the sea creatures in the book.

Altogether, this book is a fun and educational book introducing children to the wonderful world of the ocean. It also teaches some facts about sea creatures. And it provides a wonderful example of social learning by teaching children they can rely on themselves to solve some problems.

I highly recommend this book for ages 3-6, especially as an introduction to an ocean unit. The authors say that Nellie The Narwhal is the first in a series and I look forward to future books from these two talented authors.

Read the interview with the authors!