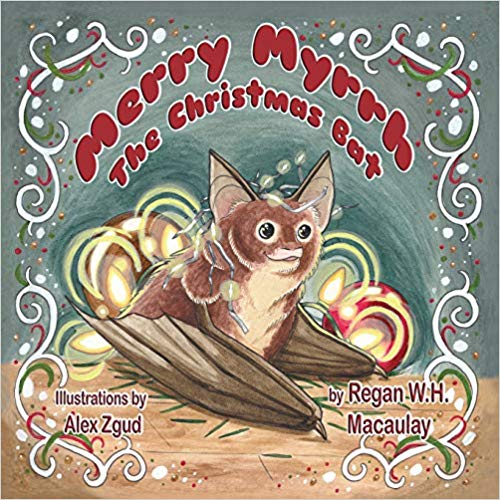 “Merry Myrrh The Christmas Bat” by Regan W.H. Macaulay is the story about a baby bat who has an interest in Christmas after hearing about its excitement from his parents. Myrrh’s parents are named Mr. and Mrs. Raft, and they are barn bats. Before Myrrh was born, every year they would wake up during the winter to look in the window of a house and see all of the Christmas decorations. The bats see the Nativity first by the window, with the Gold, Frankincense, and Myrrh. Then they see the Christmas tree with pretty ornaments and tinsel around it. Next, they see the candles on the mantel over the fire with the stockings and toy sleigh with reindeer. After seeing all of this, the bats go back to the barn and sleep the rest of the winter. Then Myrrh was born, and he was named that because they loved Christmas so much.

The bats talked about Christmas a lot, but they wouldn’t let Myrrh go with them. Myrrh got his friend Sensa Squirrel to wake him up early so he could go on his own, without his parents knowing. When he looked in the window, he saw all of the pretty Christmas decorations, and he saw that the window wasn’t closed all the way. He snuck into the house and got into things and that made the people inside wake up and find him. They were nice and took him back outside to the barn where his parents were waiting for him. His parents forgave Myrrh for sneaking out and they all went back to sleep. I really liked this book because I like reading Christmas books. This was a fun story that I think is a good one to read around Christmas time, or any time of the year.

A Note from Mom: “Merry Myrrh, The Christmas Bat” by Regan W.H. Macaulay was a cute story about the feelings that Christmas can give us. I liked how the author made it a point to talk about both sides of Christmas, the Christian and the secular sides; too often it seems like Christmas is made to be just a secular holiday, when there are quite a few people that celebrate the Christian aspect of the holiday as much, if not more. At the end, the story shows a loving and forgiving set of parents and paints a lovely picture of Christmastime for kids of all ages.