Maudie, the Parakeet, and the Fire Drill by Mary Maude Mayer 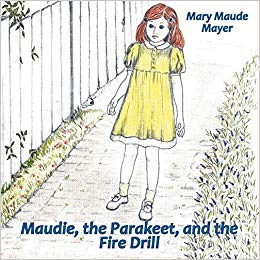 I really liked “Maudie, the Parakeet, and the Fire Drill,” by Mary Maude Mayer. I could tell right away when Maudie was doing something she shouldn’t have, but I could also understand why she lost track of time and forgot to ask for her mother’s permission first . Maudie was trying to be a good friend to a little girl whose pet had died. So she decided to go with the little girl to her house.

I liked how the author wrote her story so that you really felt like the characters in the book did. The pictures in the book were drawn very well. You could see by the people’s faces how they felt towards Maudie, when her mother couldn’t find her, and they told her she should go home.

I think Linda’s grandma, (the girl whose bird died), should have called Maudie’s mom to tell her she was at her house, having a snack. Then the Maudie’s mom wouldn’t have worried where she was.

Maudie was my favorite character in the book, because she was kind and tried to help out her friend.

After what happened with the people in the neighborhood looking so worried and the look on her mom’s face, I am sure that Maudie learned her lesson. I don’t think she will go off on her own, without telling her mom where she is going. I guess as kids we don’t always think what we are doing is wrong, until we get in trouble.

“Maudie, the Parakeet, and the Fire Drill,” by Mary Maude Mayer is a great story to teach kids that we have to ask if we can do something or go somewhere first to make sure it is safe. I think the author did a nice job explaining responsibility to kids, through a story we can understand.