Larkin on the Shore by Jean Mills 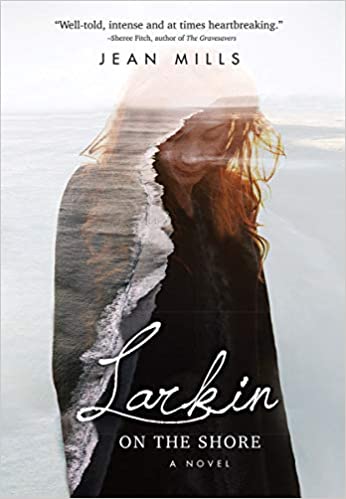 “Larkin on The Shore”  by Jean Mills is an interesting coming of age novel about Larkin, a young teen struggling with major problems mentally and physically which the reader explores through Larkin’s narration. She goes to a small seaside town, Tuttle Harbor in Nova Scotia, Canada to go live with her grandmother for a refuge from the chaos in her life. Once there in Tuttle Harbor, Larkin is met with many challenges in her daily life including her summer job sorting books at her grandmother’s book exchange/cafe. Along the way, Larkin meets an array of people who can change her life in unexpected ways.

The idea for the novel is broad but the way it is written shows realistic speech and actions of a teenager. Although it is a bit exaggerated, the interactions with adults make it feel realistic; in young adult literature adults aren’t played on very much, but in a teenager’s life adults play a large part in shaping their futures and behaviors. This is shown in the novel. A very enjoyable aspect of the story is seeing the characters learn and grow from their mistakes. Because of that, it makes you root for the characters to see them develop. It is interesting to see the story through Larkin’s view, seeing how she feels and contrasting her emotions to what she does gives the story an edge.

What I really liked about the characters was that they were very relatable. Larkin is quite a relatable character because her situation is pretty true to life since many teenagers don’t have both parents or suffer from anxieties. Another character that I feel is relatable is Larkin’s grandmother Granne (Grandma Anne) because she is a very supportive and strong person when Larkin needs her, making you feel a motherly air around her character. All of the characters are believable making them very interesting to read.

The story is well told. I liked how we learn about Larkin in her narration and I would’ve liked if it enunciated more on why Larkin has these problems instead of it going on about how it affects her. The feeling throughout the book is quite intense at times and at other times serene. Mills does a good job of making those transitions. The book has many feelings which give it texture and it makes it all the better to read.

“Larkin on The Shore”  by Jean Mills was very enjoyable pulling me through to the end. How the situations and the settings were woven together made a very flowing story. Because of the situations and the realism to the story, I would recommend it to a middle-grade audience or a slightly more mature reader. The book goes slowly so it would cater to an older audience. This book would be fantastic to read during a slow day since it easily gets you hooked.