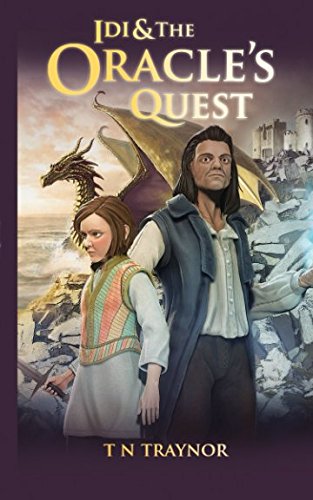 If you like mysterious rendezvous, witches, castles, demons, dragons and a quest to save the world then “Idi & The Oracle’s Quest,” book one in the Born to Be series, by T N Traynor, is a story you definitely should read.

A spell of forbidden love is cast, only to leave a princess grieving over her love after he is killed, and she is banished from her kingdom for the child she is carrying. Little does she know that the elements or earth witches have taken a solemn vow to protect her and her unborn child from an evil wizard by the name of Norvora. If he gets control of the child, he will unleash unimaginable horrors from the depths of Astaroth.

A plan is made by the fairies to intercept Princess Cassandra and her unborn child before Norvora can reach them. Their journey takes them through a forbidden forest to reach the mountains to a town called Tamarind.

A great and kind wizard named Marcus is called upon by the oracle Oleanna to find a boy named Idi who will become the greatest wizard of all time. Idi is an orphaned boy who has been pick on his entire life and felt like he would never amount to anything, until Marcus finds him and asks that he accompanies him on an important quest to save the kingdoms. Together they will set out on a journey to find the child who is meant to be king.

I really enjoyed reading “Idi & The Oracle’s Quest.” The story line was fast paced with hint of suspense. I liked how the author combined characters such as wizards, elemental witches, dwarfs and a dragon in a not-so-fairy-tale-like setting. The chase through the forest kept you on the edge of your seat, not knowing if Cassandra and the fairies would make it to safety before the evil wizard Norvora and his henchmen caught up with them. Every chapter had a twist in the story that was exciting and unexpected. My favorite character would be Idi. He felt like no one cared for him, but he would not give up on others and was always there for them.

“Idi & The Oracle’s Quest”, book one of the Born to Be series, by T N Traynor is a magical story that will leave you wanting more. I would recommend this story for 9th graders and up, and I look forward to the next book in the “Born to Be series.”