I Know When You’re Going to Die by Michael J. Bowler 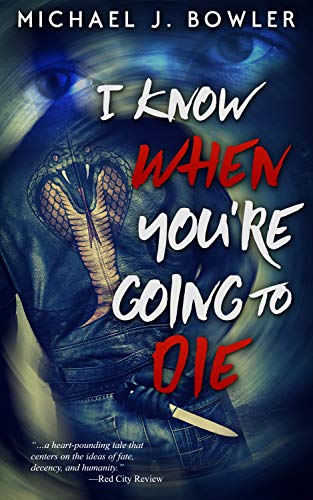 Michael J. Bowler’s “I Know When You’re Going To Die” follows sixteen-year-old Leonardo Cantrell.  One night, while volunteering at a local homeless shelter, Leo has a mysterious encounter with one of the shelter’s residents that will change his life forever.  The strange old man ‘gifts’ Leo with a magic power that will allow him to see when another person is going to die just by making eye contact.  At first, Leo isn’t sure what he’s supposed to do with this newfound superpower, but then the unthinkable happens: he accidentally sees his best friend’s murder.  Now Leo, his best friend J.C., and new-girl Laura have to race against time to figure out why J.C. is going to be killed and change the future before it is too late.

The idea for Bowler’s novel is certainly unique.  I read a lot of Young Adult literature, and it was quite refreshing to read a book with a story idea that I have never seen before anywhere else.  I think one thing that Bowler really conveyed well with this book was that how we treat other people day-to-day can really affect our future well-being.  Leo and his friends live in a wealthy part of the city, go to a prominent school, and come from powerful, wealthy families.  Despite the glamorous exterior, however, each of their lives is rife with deceit, tense home lives, and competition to own the latest, coolest gadgets, get “in” with the “right” people, and fit into stereotypes put on them by their surrounding community.

What I really liked about Bowler’s characters, especially the protagonist, Leo, was that readers were presented with a young man who, despite his material wealth, strives to make sure that people see him for who he is inside, rather than the things he owns or because of his powerful, rich, movie-mogul mother.  In fact, one of Leo’s greatest joys is helping out at the homeless shelter, where he feels more at home than at his own house and with his own parent.  The emphasis on a young teenager wanting to spend time helping others is a powerful image that more kids need to be exposed to, and one of the best ways to do that is through Young Adult literature.

While the idea for the story and the characters were certainly unique and interesting, I found that the presentation of the story left a little to be desired.  I think the biggest thing that got in the way of really getting engrossed in the book was that the tone felt just a little forced.  The dialogue did not always feel authentic as things that teenagers would actually say, and it seemed like part of the problem with the dialogue feeling forced or not authentic is that the speaking characteristics of the characters were hard to differentiate between each other.  When I read, usually I identify certain quirks or trademarks in a character’s dialogue that really helps highlight their individuality, and I did not quite feel this with “I Know You’re Going to Die.”  I also think that the pacing of the story leaves room for improvement could be.  The story moved very fast.

Based on the current style of the writing, however, I do think that Bowler’s book could be catered well to a younger teen or middle grade audience.  The tone of the story on the whole had a Percy Jackson-like air to it.  I can see it being a book that could be well marketed to young teenage boys, in particular, between the ages of about 12 to 14.  This is an age group where reading is either avoided at all costs or makes up a large part of a kid’s leisure time.  Stories like Bowler’s could be great incentives to get more younger teenage boys more interested in reading.