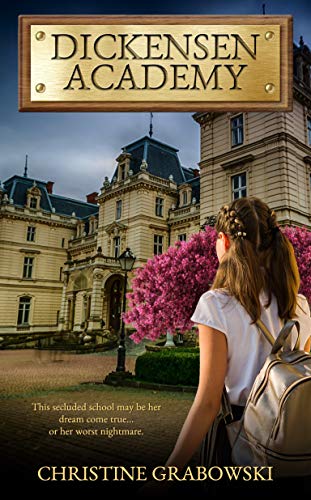 “Dickensen Academy” by Christine Grabowski is a story that keeps you wondering if what you are reading is part of a dream or actually real?

Autumn Mattison is your average 15-year-old who is about to start her first year in high school. But not just any high school, a private school called Dickensen Academy. This school is by invitation only and located in the middle of nowhere, tucked among large evergreens and mountains. Since the school can only be attended by those who meet certain criteria, tests were held over the summer to find just the right candidates.

Autumn soon develops friendships with several of her classmates including her roommate Aditi and a boy by the name of Ben, who she remembers from summer testing. As everything she experiences at the academy starts to feel like she has somehow already done it, she starts to question why it all seems so familiar. Not until later in the school year do Autumn and her classmates find that her classes are about to take a strange twist.

Struggling with her unusual class curriculum, Autumn starts to worry if she will be sent home because she doesn’t have the special abilities all her friends have already started to master. Getting kicked out of this type of school could involve all sorts of unnerving consequences for her. Only after a terrible accident will she discover she can live up to the school’s expectations and find that she too has the special gift of Dream-Making.

I really liked, “Dickensen Academy.” My favorite part of the story was how I was always wondering if, when I turned the page, whether what the character was experiencing was real or a dream. I thought there would have been more to Caitlyn and her abilities, but maybe that will come in later books? I guess my favorite character would have to be Autumn because she overcame her shyness and made an effort to be part of any activity that she was offered.

The setting of the story was described so well you felt like you were there with Autumn and her friends during their dream classes and around campus. I would have liked to have had more adventurous dream experiences in the storyline as it was the unusual part I liked so much about “Dickensen Academy.” I hope the author makes this into a series as I would like to find out what happens to Autumn and her friends in the next 3 years at school. I’d also like to see how her dream-making abilities become more advanced and why dream-making is such an important talent and how it is used outside of school.

I would recommend “Dickensen Academy” by Christine Grabowski for middle school-aged kids, as I think they would really enjoy the unusual experience of this academy.