“Daniel: The Age of Epimetheus” by Peter Pactor 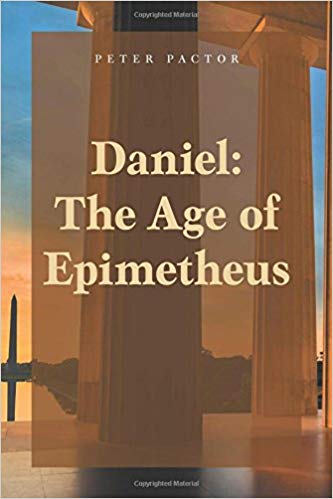 Daniel: The Age of Epimetheus

“Daniel: The Age of Epimetheus” by Peter Pactor is an interesting take on what would happen if someone could have predicted the Stock Market Crash and the economic crash that would follow. Many believe that the Stock Market was the cause of the Great Depression and though it was one of the main reasons and the trigger that lead to it, it was in fact caused by many factors such as bad investing, unbalanced control of the America wealth, and faulty banks.

It is the spring of 1929; months before the Stock Market Crash will occur, but the signs leading up to this devastating event have been appearing all over the South since the Great War has ended.  Hundreds of banks are closing, foreclosures are causing communities to disappear, and thousands are losing their jobs. Despite this grim epidemic no one seems to fully comprehend that the economy is heading into a downward spiral and eventually an economic collapse. Why should they when experts say otherwise? This seems to be the mindset of everyone who hasn’t been affected yet, but one person begs to differ: Daniel French, one very special twelve-year-old boy.

Studying the reoccurring events of economic collapses from the towns of the South, Daniel has come to the realization of the repercussions that will soon be caused by America’s current weak economy and wants to minimize as much damage as possible before it’s too late. This may seem like a difficult task for one boy, perhaps even impossible, but with the help of his friends, family, and wealthy backers who stand with him, Daniel knows that he can make a difference in helping others from the potential finical disaster that will surely come in the next following months.

Coming into this book I had little knowledge about the economic collapse of 1929, but I was open-minded in learning about it. The story starts off with Daniel French in his later years recapping his financial journey to a writer who’s in the process of making his autobiography. It then follows with the story of his tale and how he became a famous motivational speaker for hundreds about the economic crisis affecting the American people. In the beginning, I was a bit confused on how a 12-year-old was able to comprehend all this and be backed by so many famous people, but I know young prodigies exist and that this was apparently the case for Daniel French. It still would have been nice to have some background from the start on how he became so knowledgeable about the economy to make the story more believable because without this information he seemed to come across as more of a prophet than a regular person.

Alan, Daniel’s best friend, was one of my favorite characters due to how honest and good-willed he was. I believe everyone could use a friend like him in their life. I enjoyed the moments in the story where Daniel and his friends helped others by coming together and supporting them. Even if they were all strangers at some point they came together for the common good of the people and helped save countless communities. Perhaps if such people existed back then or if there were more of them, the events of 1929 would have been very different. I enjoyed “Daniel: The Age of Epimetheus” by Peter Pactor and recommend it to those who like historical fiction.  Very enlightening.