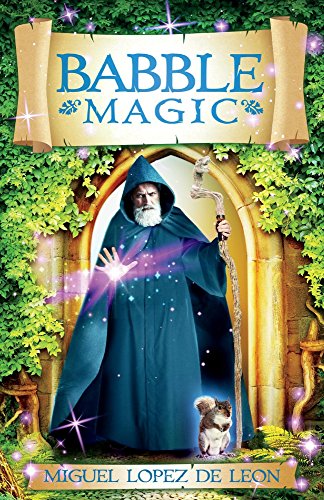 Readers will enjoy, “Babble Magic” by Miguel Lopez de Leon, with humorous characters, animals that can talk and a trip to a wizard’s convention that leads to an encounter with an evil dark forest wizard.

Bax is an apprentice to Palim, a grumpy old wizard that is trying to enchant animals, so they can talk. He calls this Babble Magic. Bax loves working with the animals but when it comes to Palim all he does is yell at poor Bax. Bax is excited when three of the animals: a squirrel, rooster and an owl begin to talk. Soon Bax is able to converse with the animals like they were regular humans. But when an unusual twist of events happens, and Palim is possessed by a dark wizard, will Bax and his new animal friends be enough to save the old wizard?

“Babble Magic” by Miguel Lopez De Leon is a charming adventure with a magical storyline I really enjoyed. I think my favorite part in the book was the author’s description of the wizard’s convention. I actually felt like I was there, experiencing all the different forms of magical attractions that were on display. The food, the magical presentations and the anticipation that Bax felt before they were to present their field of magic to the judges and audience was all very realistic.

My favorite character would have to be Doris the squirrel. I liked how she was humorous and serious all at the same time and when everything went wrong she was there to help figure out a way to fix it. I think I liked the ending of the story so much with the magical turn of events that it left me feeling like I had wished the entire storyline had that magical enchanting feeling of adventure.

For me, the middle of the book seemed to have too much dialog and not enough action. But overall, I really enjoyed, “Babble Magic” and if there is to be a series that ended the way this story did, then I would love to continue to read it and find out what other adventures are in store for the group.

I would recommend “Babble Magic” by Miguel Lopez de Leon to fifth graders and up who like that magical feeling that you get when you read about “Harry Potter” shopping at Diagon Alley.